In the production of synthetic leather and other similar products, such as laminated composites, pvc, abs, polyurethane but also textiles and films, coating plants of plastic materials are widely employed. This kind of machinery usually produces exhaust fumes loaded with potentially polluting elements, and the fumes are sucked by dedicated exhaust hoods avoiding their dispersion in the environment. 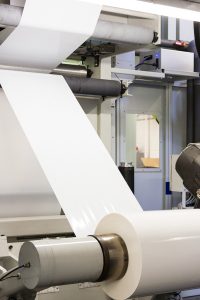 Tempco realizes fumes treatment systems in coating plants as a complete solution, typically including a cooling tower equipped with pumping system and water recirculation, combined with a fumes/water exchanger, especially designed in order to decrease the temperature of exhaust fumes.

The fumes/water exchanger is the critical point of the application, since the fumes resulting from the coating process are charged with plastics and oily substances, which could clog the thermal exchange pack quickly.

Heat exchangers intended for these applications are thus realized with special exchange tubes, with wide step fins and augmented thickness. These characteristics allow to minimize dirt deposition and simplify cleaning operations, achieved using pressure systems with no damages to the heat exchanger.