Heat recovery for cooling. In spite of the appearing contradiction – how can it be possible to obtain cold from heat? -, absorption chillers are an excellent energy saving alternative to traditional compressor chillers, requiring on the opposite big amounts of electricity.

It consists of energy efficiency cooling and conditioning systems, working on capitalization of waste heat flows, coming from other industrial processes or from solar panels, also called solar air conditioning. Those are conditioning and refrigerating green solutions, also environmentally friendly not even using CFC, chlorofluorocarbons, but low ambient impact fluids: an ideal solution for lowering pollution and Co2 emissions, with a more intelligent employ of energy, containing energy demand for conditioning and cooling, both for residential and industrial utilities. 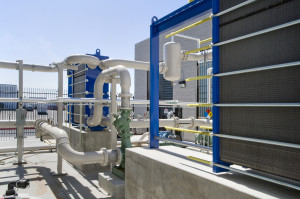 But let’s see how this is achieved and how it works, with an engineering example of an absorption chiller.

First of all, the absorption is a physical process that happens when a liquid grab heat from the environment while evaporating. This is the fundamental principle on which works any chiller and cooling machine. That being said, let’s remember that water evaporates at the temperature of 100° C at normal atmospheric pressure (760 mm Hg), but with decreasing pressure levels, and in vacuum conditions, water evaporates at much lower temperatures: for example, in an airtight tank with a pressure of approximately 6 mm Hg, water starts evaporating at 4° C.

Absorption refrigerators mostly employ a mix of water and lithium bromide as primary working thermal fluid: the two components of the solution, thanks to their peculiar physical properties, are in charge of two different functions in the cooling cycle. Water is the cooling and heat dissipation fluid during the thermal cycle, while the lithium bromide works as absorber: lithium bromide solution is indeed an excellent absorber, being able to capture all of the ambient steam, also creating and maintaining low pressure conditions.

An absorption refrigerator is then composed by multiple steps using different interconnected thermal machines, supplying the fluids at the right temperature and pressure conditions in order to enhance the several physical processes required for the absorption refrigeration cycle. These are essentially four: 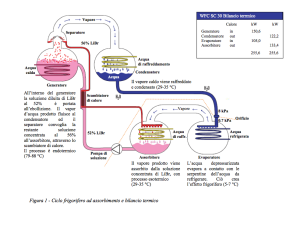 High temperature steam coming from the generator enters the condenser, that converts it into liquid cooling water by contact with pipes containing cool water coming from the evaporative tower itself.

Cooling water is then pushed into the evaporator, where is sprayed at low pressure conditions onto pipes containing fluid to be refrigerated, with inlet temperature of approximately 14° C and outlet temperature of 7° C (anyway, thermal gap and fluid temperatures involved in the several steps depend upon many surrounding factors). Low pressure in the evaporator allows water evaporation at low temperatures, removing heat from the refrigeration water flowing in the pipes.

Low temperature steam coming from the evaporator moves then into the absorber, where its temperature is lowered by the evaporative tower, and then being absorbed by the concentrated lithium bromide solution. Steam absorption by the lithium bromide solutions also provides creating and maintaining low pressure conditions between absorber and evaporator, essential for cooling water evaporation at low temperature, responsible of the refrigeration water’s temperature drop, the final output of the thermal cycle. 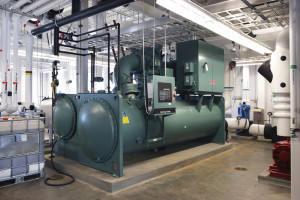 While the four steps happen, the concentrated lithium bromide solution coming from the generator at the beginning of the cycle is pushed in the absorber at the end of it, where the original percentage concentration of the solution is restored thanks to low temperature steam absorption.

An extremely fine and precise regulation of the temperature is a fundamental requirement within the production of chocolate. Chocolate production…