When we talked about storage tanks in thermal plants we meant of course open tanks.

From a thermal point of view its function is to allow water, which is an incompressible fluid, to expand or contract. In order for this to be possible it is necessary for the fluid to be in contact with a gas that can compensate for the expansions and contractions of the fluid.

There are three possible configurations:

The volume of the expansion vessels can be calculated by using the following expressions:

for a vessel that is open to the atmosphere:

for a closed vessel without a diaphragm:

for a closed vessel with diaphragm:

In superheated water systems the temperature t2 can reach ​​up to 130 ° C and beyond.
Instead in cooling water circuits:
t1 = the maximum water temperature that can be reached when the system is not functioning, 35°C;
t2 = the minimum functioning temperature, 7°C, for example.

The water’s specific volumes are shown in the following table. 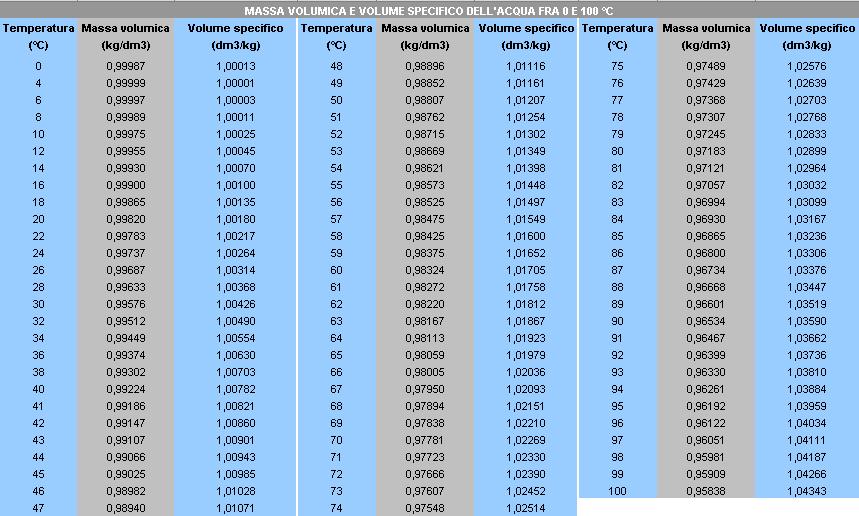 From a hydraulic point of view the expansion tank determines and sets the system’s pressure reference. At the point in which the vessel is inserted in the circuit, the pressure is equal to the vessel’s air pressure which is increased or decreased by the liquid located above or below. 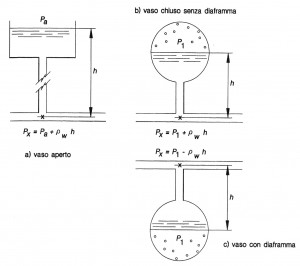 Pressure values at the insertion point of different types of expansion vessels.

Open expansion vessel
As can be see by its expression, the vessel’s capacity must be at least twice the water’s expansion volume in order to prevent water from leaking due to possible overflow during the heating phase and is fed back into the vessel again during the cooling phase. The illustration shows the accessories that the vessel must be equipped with. 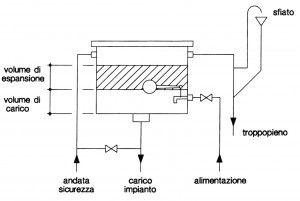 The vessel and the safety tubes must be protected from freezing temperatures. As far as systems using many boilers is concerned it is good practice to provide each with its own boiler expansion vessel, thus making it possible to eliminate one or more boilers. 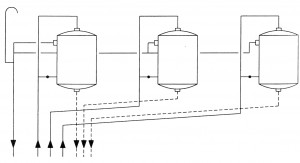 The hot water heating systems that use open expansion vessels, with a functioning pressure that does not exceed 5 bar, should be provided with:
– a safety pipe between the vessel and the generator that has a diameter equal to its virtual length and to the generator’s thermal power (see; “Safety standards for appliances containing hot liquids under pressure”);
– automatic adjusting thermal switch;
– automatic blocking thermal switch;
– a thermometer with an inlay for the checking thermometer
– a pressure gauge with flange for the checking pressure gauge.

The illustrations below show some possible connection diagrams; the illustration of the connection of the expansion tank with filler and safety pipes is typically used in the German DIN standard and the diameters of the tubes, as a result of this standard, can be calculated by using the following expressions:
– in the event of overheating, the safety pipe must be able to vent any vapor produced in the boiler.

– for the expansion or loading pipe which must enable the speedy filling of the boiler using water from the vessel.

– where P is the power of the generator or generators expressed in kW. 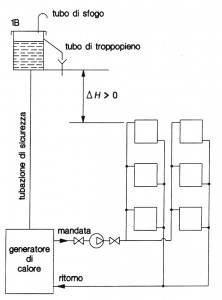 Connecting the open expansion vessel to a boiler. 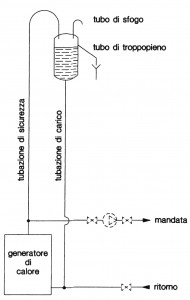 Connecting the expansion vessel with loading and safety tubes. 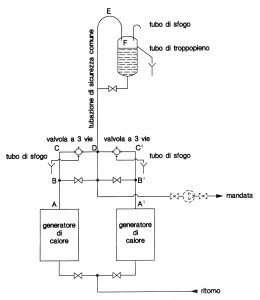 Connecting two heating generators to only one safety tube.

The vent tube must be conveyed in order to prevent it from causing to persons in case there is water discharge. Systems with a functioning pressure exceeding 5 bar must have a secondary automatic blocking thermal switch independent from the other switch. As far as the position of the circulation pump is concerned, with respect to the vessel’s circuit connection point, we should pay close attention because the circulation pumps must be installed in the water distribution network in a way that both physical and technical functions can be carried out. It should be noted, above all, that tube throttling should not be carried out on the open vessel plant’s two safety pipes: therefore, a pump, whatever type it may be, is considered a choking device and must consequently be installed in areas away from the connections with the vessel. Another important aspect that should be taken into consideration is installing the pump with respect to the boiler: suction (when sending) or under pressure (when returning).

There are no safety requirements regarding this issue: the problem is solved by taking into consideration that no point in the network should be in depression. The piping networks, in fact, are never perfectly sealed against air, which can penetrate, for example, if a heating body goes into depression, through the control valve’s stuffing box. In order to verify the pressure of the piping network’s critical points it is necessary to check the diagram of the pressures along the circuit and to check the installation instructions. Let’s look at the following two examples of a start pump and a return pump. 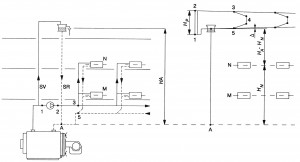 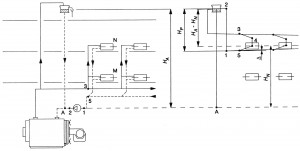 A closer look at the problem shows how the lowest radiator is not at risk. The highest one is in danger because the pressure is less than HN compared to the lower radiator. This pressure’s value is:

The term (HA – HN) is the difference between the vessel’s water height and the radiator N height. In this scenario too the pressure is positive.

In order to avoid this value from becoming negative (depression in the highest radiator) it is necessary (let’s neglect Δ to be on the safe side) for HA – HN , or rather the level difference between the vessel and the highest radiator, to be greater than the pump’s prevalence.  In some buildings where HA – HN is 3 : 5m it is quite probable to see a pump, which has slightly less prevalence, ensure the circuit’s water circulation without any form of depression.
It is therefore necessary to evaluate each scenario and to appropriately position the pump’s flow, whether it be start or return flow. The start pump ensures that no point of the network goes into depression. The possible disadvantages are that water at high temperatures could get into the pump and as a result there could be high pressure in the network.
The illustration below gives details of the equipment required by IPESL regulations for an open vessel system.

Closed expansion vessel
We have already seen at the beginning of the chapter how to calculate the capacity of a closed vessel, in the expression which is valid for a closed vessel without the diaphragm, the absolute pressures to consider are:
Pi = absolute initial pressure corresponding to the hydrostatic pressure at the point where the vessel is installed measured in bar (kg/cm2), increased by an amount determined by the designer and, however, not less than 0.15 bar;
Pf = maximum absolute functioning pressure, in bar, equal to the calibration pressure of the safety valve, increased by the excess pressure of the valve and decreased by an amount corresponding to the difference in height between the expansion vessel and that safety valve, if the latter is placed lower or in other words increased if placed higher. 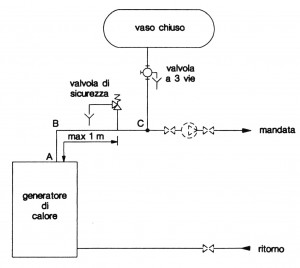 A closed vessel system without a diaphragm.

For closed vessels with a diaphragm, assuming the definition is Pf, the Pi pressure to place in the the closed vessel with a diaphragm is:
Pi = absolute pressure in bar to which the gas cushion is precarious, a pressure which cannot be less than the hydrostatic pressure at the point where the vessel is connected. 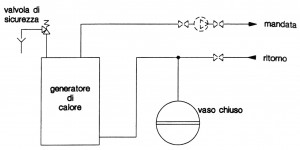 The expression of vessels without a diaphragm can only be applied to self-pressurized vessels where the pressure prior to filling is equal to the atmospheric pressure. For pressurized vessels, for example where the pressure before filling is greater than the atmospheric pressure, and has a variable pressure while functioning, the formula to be used for testing is the same used for the closed vessel with a diaphragm, and even for vessels without a diaphragm, increasing the volume resulting from the calculation of a quantity equal to the initial volume of water contained in the cold system vessel; in which case the system designer must indicate, in addition to the pre-charge pressure and the total vessel volume, the volume occupied by the gas when the system is cold.

For pre-pressurized vessels at constant pressure and variable pressure level during functioning, the tank volume must be calculated the same as for open vessels. For pre-pressurized vessels that have a constant level and pressure while functioning, the volume of the vessel must be sufficient enough to contain the excursions necessary for the devices needed when discharging and water re-integrating is necessary.

In closed vessel heating systems with a power up to 350 kW and a working pressure that doesn’t exceed 5 bar, you must have:
– a safety valve which enables the discharge of a quantity of steam per hour (kg/h) of not less than P/0.58 (where P is the power of the generator in kW);
– automatic thermal regulating switch;
– automatic thermal blocking switch;
– blocking control device;
– thermometer with small well for the checking thermometer;
– a pressure gauge with flange for the checking pressure gauge.

Even with closed expansion vessels it is possible to exclude heat generators provided that the pipe connected to the vessel’s generator is installed using a three-way valve with the same open vessel characteristics. It must ensure the generator’s connection either with the expansion vessel or with the atmosphere. With closed vessel, circulation pump heating systems the heat input must be automatically interrupted should the pump stop functioning and this can be implemented with an electric burning pump or via a flow switch.

Closed vessel pressurized systems that run on constant pressure and at a variable level must be protected by a fuel shut-off valve or a temperature relief valve because there is no correlation between increased temperature and pressure. For systems with a pressure exceeding 5 bar a second blocking thermostat must be installed which is independent from the first one.
The illustration below shows the instrumentation required for closed vessel systems.

In addition to what has already been written please note:
– automatic filling unit which reduces the aqueduct’s supply pressure and reintegrates any losses of water in the cold state; the filling unit is made up of the pressure reducing valve, the filling valve and the restraint and filter valve.
– air separator with automatic vent valve and float.

Safety and control instrumentation for a heating system with a closed vessel (the symbols used are those used by the regulating standards).